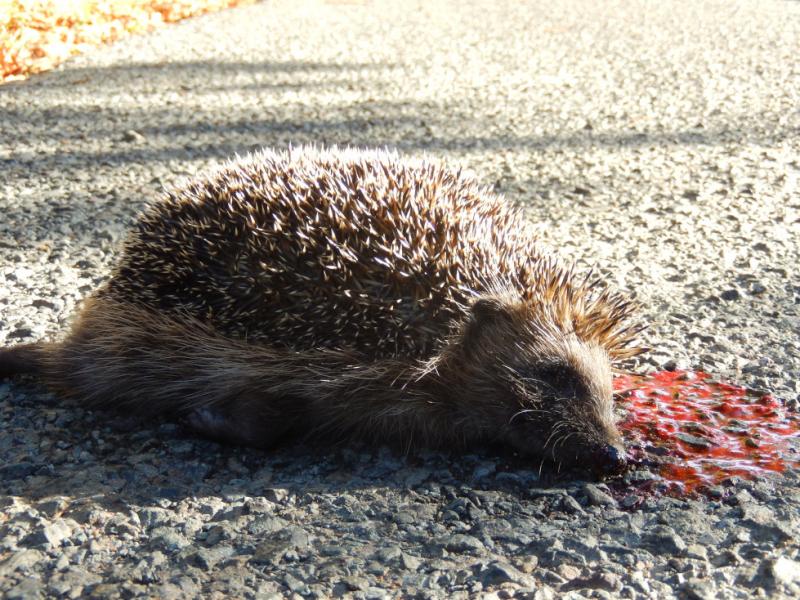 I saw this hedgehog whilst delivering leaflets early one morning. She(?) was still warm and the blood was still drying.

I wondered whether the driver even knew what had happened. In the contest between an 800g ball of prickles and half a ton of metal and rubber going at speed, this bundle of fur stood no chance.

I picked her up gently and put her on the side of the road. It just felt the right thing to do.

My memories of these lovely creatures flooded back as I recalled as a 4 year old finding one of these hoglets just outside the backdoor feeding from the cat bowl. It curled up immediately and it took all the patience I could muster to wait for it to uncurl and peek out with those little beady black eyes and snuffling snout.

I think, like many of us of a certain age, we recall that we sort of fell in love with the hedgehog as children – they were unusual, different, prickly yet perfectly shaped.

There were far fewer cars on the road then and far more hedgerow habitat.

Today these creatures are rare, the population declining as the road network expands and hedgerows grubbed out.

Do we really care if this creature disappears from our lives? Probably a momentary sadness before carrying on with our busy existence – we can’t stop driving or take up the roads after all. But driving more slowly around dusk and dawn along country lanes will help a little, I think.

Should we be counting the years before the experience of a live hedgehog is denied the curious child and the future generations of nature lovers they represent? How many years before the name is removed from the dictionary and the fact that it ever existed forgotten from our collective psyche?

We know that experiences of nature in childhood, engender respect and care for the natural world later on in life. Indeed to name a thing is to relate to it. But we really need a wiser relationship with nature; a value far deeper than an immediate economic one.

But the ultimate tragedy is this. When Natural England, the government’s public body tasked with protecting the natural world is so under-resourced that it has been reduced to crowdfunding to carry out its statutory duties in regulating the protection of wildlife sites. When the pledges the government signed at the 2010 biodiversity have not been fulfilled giving us little faith that the current grand gestures are any the more meaningful. And recognising that our country is noted as one of the most nature-depleted in the world, it is no wonder that we despair that we will save our wildlife from extinction.

A life without hedgehogs to wonder at, will be the lonelier for their loss. How we save our fellow creatures from extinction is now up to us to work out, for government will not, judging by its record. I dearly hope we can.